Humanity's Collective Pathway to a Higher Level of Existence

Trajectory June to September 2016:
Adjustment to the communication- and information system for the completion of the 'old' life

Until now, when making functional changes to the human energetic system, I always took the 'new' multidimensional human being as a starting point. I have therefore designed a totally new energetic communication and information system with connections to the old 'belief system' where the old way of going through life interfered with the new way of living.
As a result, the multidimensional person could continue with his or her new life, while the 'ordinary' person was limited in its possibilities to shape a deviant life to make sure its life fits within the whole.
Meanwhile, the new energetic system has been implemented with everyone, so that they can grow from 'normal' to 'multidimensional' human beings at their own pace.

Problem: duality as a basis for living in the old reality

However, we now have arrived at the point where the principle on which the deviant old reality is built interferes with the new reality in such a way that the possibilities to manifest the new reality are severely limited, namely to three possibilities: the two extremes and the middle (the golden mean) of a particular spectrum.

In the past, the principle of duality could be successfully used to manifest a deviating, limiting reality (see Using duality as a 'tool' and let it work for you instead of losing yourself in irreconcilable contradictions).
All kinds of energetic mechanisms have been developed that make use of this principle of duality. In fact, it is the basis of our old reality.
Individuals apply these mechanisms unconsciously, because they reside in our collective subconscious as thought forms which determine our thoughts, choices, and behavior. 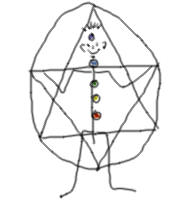 This issue could not be resolved by connecting to the new system. The old belief system, which some know as the Merkabah, had to be adjusted.
The cause of looking from a perspective of opposites (duality) lies in the fact that the Merkabah can turn in all directions and the tetraders it consists of can even become separate from each other.
The structure can then be put in a certain (static) position through manipulation. As a result, the chakras can be (partially) closed, which disrupts the information supply. This creates unwanted interference with the functioning of the chakra system.

The functioning of the Merkabah

The Merkabah is an energetic structure that consists of two loose tetrahedrons that are intertwined. Together they can encompass the whole body.
The tetrahedrons are similar to the internalized star structures of the new system, each of which is made up of two pyramids which are intertwined from the points. These are pyramid forms because a dimension has been added that we want to include in our experiences, the dimension of the oneness of life.
The principle of the structures is the same, they contain all the information we need to shape and live our lives.

One tetrahedron contains all the potential possibilities from which we can choose, and the other contains information about the reality as it is manifested so far.

When both tetrahedrons encompass the heart chakra, present manifestation and future possibilities can be related. This enables a person to make the right choice for the future he or she wishes to manifest, a choice that fits within the lives of others and life as a whole.

The colors green and pink are associated with the heart chakra. They are frequencies of the tetrahedrons, which means that they can be perceived in a certain color. The tetrahedron with the potential possibilities is pink, the one with the manifested reality is green. From now on I will talk about the 'pink structure' and the 'green structure'.

In this construction there is no room for the higher Spirit within the physical reality. It is therefore outside the body and is connected to the Soul through the crown chakra, through which the Soul can receive the ideas to form life with from the Spirit.
The Earth is also surrounded by a Merkabah structure. The Merkabah of the human is connected to it.

The structures can be moved through the information in the chakras. The chakras then are the pivot point. The movement of the structures around the body and relative to each other depends on the location of this pivot point.

For example, when the pivot point is in the crown chakra and the base chakra, the tetrahedrons can rotate in such a way that they end up outside the body. This happens in the event of a severe traumatic event that the Soul does not think it can handle. The Soul disappears out of the body, floating upwards and the pink tetrahedron turns upwards. At the same time, the green tetrahedron falls down because the connection is gone; the human mind gets 'down' as a consequence, resulting in a depression.

When the pivot point is in the heart chakra, the entire structure can rotate along both the horizontal and vertical axis. The structure can then be turned in its entirety, upside down and backwards.
The consequence of this position is that the 'inverted world' is created, a world that now forms our old reality.
The dense green structure obscures the view of the subtile pink structure. Our inner world, the potential possibilities for the future, disappears from view. Moreover, our Soul is now unprotected in physical reality and therefore feels extremely vulnerable. This sense of vulnerability is abused in all kinds of manipulative structures, which can lead people off their own path.

An inverted green structure can also be placed over the pink structure of someone else when it is in the right position. This allows you to include someone in your own reality and this person will accept your reality as true and further shape it for you. The result is that someone seems completely idolized of that person or the worldview of that person and also starts to defend that person while it is obvious to outsiders that that person is completely wrong.
This is the most effective way to let others shape your life and convince the outside world that your (personal!) reality is amazing.

The solution to this problem is to lock the tetrahedrons in the neutral position. As follows:

When all the old information has been worked through, the Merkabah structure is no longer necessary.
You would expect that the structure can then simply remain in place, because it has become completely transparent. In practice, however, this transparent structure appears to cause problems in the interaction with others, resulting in unpredictable and undesired results.
This problem can be solved by completely removing the Merkabah structure.

Now that we have finally understood the principle of limiting duality and all the energetic mechanisms that worked with it, we can use all our possibilities attuned to each other and Life as we wish to start shaping and living our best possible life.
Our 'old life', our old way of doing things, is no longer an obstacle for discovering all the new possibilities of the new world that lies ahead.

Humanity's Collective Route to a Higher Level of Existence

The Collective Roadmap of Humanity

Building a Higher Existence (from July 2015 to the present)

March to June 2015:
"Destination reached": living from a new reality
June 2014 to March 2015:
The battle for the best life possible
March 2014 to June 2014:
Aligning available resources for the short, medium and long term
December 2004 to March 2014:
Where do we come from? Where are we standing right now? Where are we going?

September 2014:
Balancing life across and through all levels of multidimensional life creates a better balance in life as a whole
October 2013:
Milestone reached: the necessary preparations for individual and collective  level have been completed. Next phase: renewal of society.
August 2013:
Making the most of the multidimensional possibilities for solving bottlenecks, by taking the human ideas as the starting point
July 2013:
From now on, with the next step everyone is building the best life which is possible within a multi-dimensionally functioning whole
June 2013:
Being aware of the cohesion between the various layers (dimensions, aspects) of your life